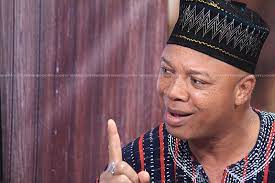 A fellow of the Institute of Energy Security (IES) and former Ranking Member on the Mines and Energy Committee in Parliament, Adam Mutawakilu, has reiterated the need for government to make renewable energy a critical component of Ghana’s power mix and create an enabling environment for the private sector to enter the industry.

Government has over the years been unable to attain its renewable energy target, revising it from 10 percent of the total energy mix by 2020 to 2030.

Speaking to the media after the Institute of Energy Security was presented with a global climate clock as the world races against time to end the menace of greenhouse gases, Adam Mutawakilu also noted that the time is ripe for the state to set up a renewable energy authority to quicken the process.

“In respect to this, in the petroleum subsector, we’re still having challenges since we are not able to make good use of the domestic gas and raw gas. We have been flaring to some extent some of these gases. Not only in Ghana but also in Nigeria and I think that if this continues, we will be in serious trouble in the near future. However, government has not given any clear directives with respect to renewable energy. We planned, and the determination was to get 10 percent by 2020.”

“We have crossed 2020 but it’s still 1 percent. It’s even less than 1 percent and the timeline has now changed to 2030, but there are no serious moves to ensure that we achieve this by 2030, and it’s a clear sign of worry. As IES, we have been continuously asking government to set up a renewable energy authority, so that there will be a focus for renewables,” he said.

In its quest to help implement clean energy transitions and also deepen the penetration of renewables in the energy mix among other efforts, the former chair of the National Wildlife Federation, and currently Goodwill Ambassador to the Pan African Parliament, Jerome Ringo, presented the climate clock to the Institute for Energy Security.

The move is a call to action to draw attention that time is nigh to move from advocacy to action to effectively deal with climate issues in the country.

Ghana is the second African country to receive the world climate clock.

The climate clock ticks with a glimmer of optimism as it reports the window to address global warming and also measures the rising use of renewable energy.

It shows the deadline for the global carbon budget running out.

It also draws the world’s attention to the urgency for action.

The next 7 years is humanity’s best window to enact bold, transformational changes in the global economy to avoid raising global temperature above 1.5 C, a point of no return.

The deadline on the clock alerts the world about the critical time window left to take the most meaningful action to combat it.

The green line which is the lifeline on the clock shows the percentage of global energy from renewable sources, wind, water, solar, and bioenergy.

Sections of N4 to be closed to vehicular traffic on Saturday, Monday