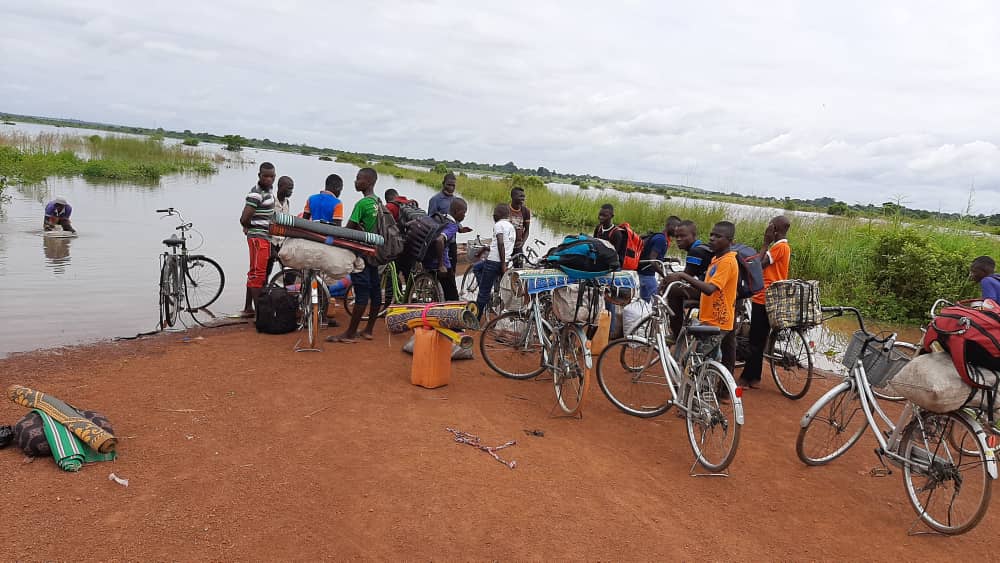 The Basic Education Certificate Examination (BECE) candidates in Kpalba who were cut off from the examination centre in Saboba in the Northern Region due to flooding have been safely transported to their centres to partake in the 2020 BECE which begins tomorrow [Monday].

The School Prefect of Kpalba AP Junior High School, Issah Zubiru, recounted the intervention which was coordinated by their parents to Metro News

The students, however, had to pay money for the support.

“We had to pay GHS 2.00 each. We then covered quite a distance on foot. After some time, a pick up came for us, then a bus took us from there to Saboba.”

The District Chief Executive (DCE) for Saboba in the Northern Region, George Bigrini, had said plans were in place to transport the affected students.

It is unclear if he played a role in the support given to the students.

Torrential rains in the northern part of Ghana coupled with spillage from the Bagre dam in Burkina Faso left hundreds of farmlands submerged.

The Pwalugu bridge was also flooded to the waist level covering over a 1-km stretch of road.

The about 200 students in the Kpalba circuit in the Saboba District on Friday, September 11, 2020, appealed to the government to provide them with a means of crossing over to the district capital, Saboba, where their examination centre is located.

They feared missing out on the BECE which begins on Monday, September 14, 2020, as the roads have become impassable due to the floods.

“We are afraid of the water bodies here. How are we going to write our first paper on Monday? We are pleading with the District Assembly to either find a means to get us to Soboba or allow us to write the exams in our school,” one of the candidates said.

“We cannot cross the water to write the exams. If WAEC does not allow us to write in our school, we will miss out on the BECE,” another candidate said.