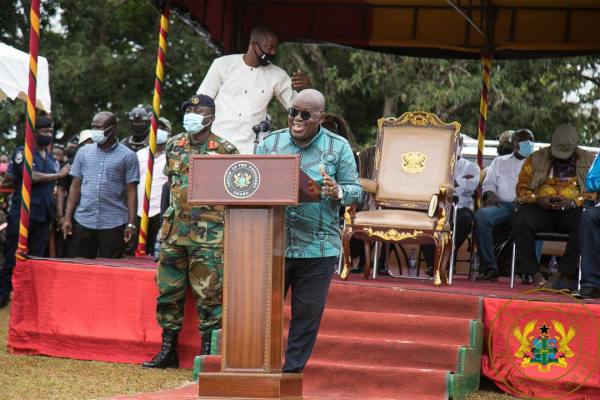 The President, Nana Addo Dankwa Akufo-Addo, has asked residents of the newly created Ahafo Region to renew his mandate in the December 2020 elections, so his government can consolidate the gains chalked since his assumption of office in January 2017.

Rounding up his 2-day tour of the Region, on Sunday, 13th September 2020, with visits to Hwidiem, Goaso, Dadiesoaba, Mim, Akrodie, Kukuom, and Sankore, the President noted that the Ghanaian people have had an opportunity to witness at first hand the impact of the policies and programmes implemented by his government.

“If you believe that the policies of my government have had a positive impact on your lives, and you have not regretted voting for me, I will urge you to continue to have faith in me. In the December elections, let it be four more years for Nana to do more for you,” he said.

The President also urged residents to vote for NPP parliamentary candidates, so as to deliver another decisive victory for the people of Ghana.

“Come and join me on the ‘elephant. The ‘umbrella’ has nothing to good to offer the people of Ghana, as their record in office shows,” the President stressed.

“For this year’s election, I want everyone to understand that, so long as I am President, irrespective your party affiliation, anyone who wants to perpetuate violence will have to deal with the laws of our land. That person will not go scot-free this time around, particularly in Asutifi South and Asunafo South. We do not want such acts of lawlessness in Ghana,” the President said.

At Dadiesoaba, the President commissioned a newly constructed maternity ward at the Dadiesoaba Health Centre, paid a courtesy call on the Omanhene of Goaso, and inspected ongoing construction works at Akrodie Senior High School.

Again, at Akrodie, the President cut the sod for the construction of a 15-million-euro solid waste treatment plant, and inspected work on the 11.5km Nobekaw-Sankore Road. The construction works for this road commenced on 18th February 2020 and is currently 32% complete.